In this exercise, students will learn about RGB LEDs and be able to execute simple if statements to create a button controlled color mixer. When the red button is pressed, the LED will shine red. The same will happen when the green or blue button is pressed. When two buttons are pressed at the same time, a mix of the two colors will shine. (e.x. pressing the red and blue button at the same time will results in a purple LED.) When all three are pressed, the LED shines a mix of all three colors.

RGB LED: This is essentially three LEDs in one. A red, green, and blue LED are housed within a normal LED housing. Each internal LED shares to the same ground wire, resulting in four total legs. To turn one color one, connect the common ground to ground and the desired color to power. Powering multiple colors will result in a blending color, as the illumination from the multiple colors blend together. Theese LEDs will act as OUTPUTS in our code.

Push buttons: Push buttons are simple circuit swtiches that close a circuit when closed, allowing electricity to flow through. This circuit uses three push buttons: one red, green and blue to turn on the corresponding LEDs. These push buttons will act as INPUTS into our code.

First lets take a look at the hardware set up: 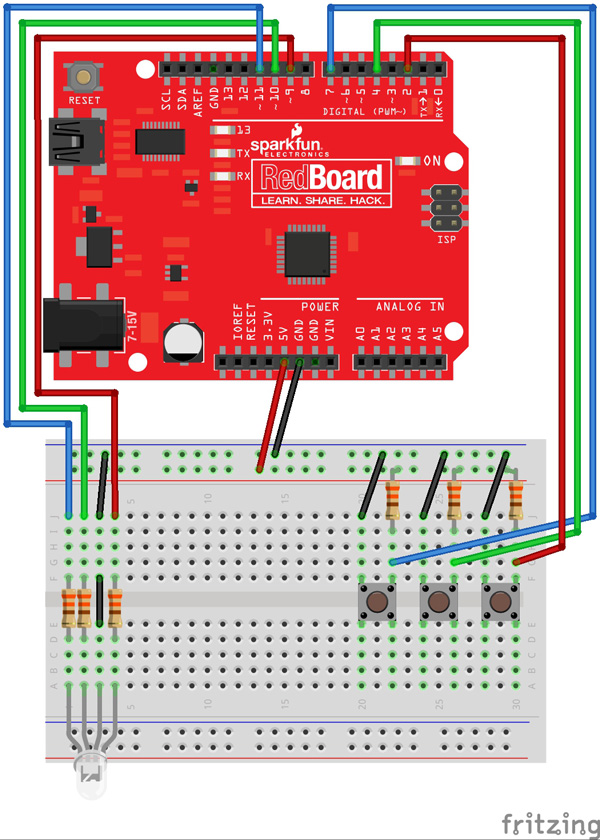 Now the code. The code is very simple so that students can easily get the functionality working right away. Then, they can explore coding concepts that will change the functionality of the LED. Here are a couple concept questions that explore the use of if, while, and do while statements. This is a great opportunity to have students predict the changes, then implement them to see what happens to the LED, so they can actively think about what the code means rather that just copy paste it.

Coding questions to ask yourself

A: Without the else, there is no condition for when a certain button is not being pressed after it has initially been pressed. The corresponding LED will just remain on, and any additional button presses from the other two colors will turn on their corresponding colors as well. This will still result in color mixing, but you won’t be able take out a color once it’s button has been pressed.

A: The first button that is pressed turns on it’s corresponding LED, and that’s it. No additional button presses will turn on their corresponding LEDs. Why? Because we used a while loop, the code is now stuck in that loop unless we give it a condition that can break it out of the loop (like, say break out of the loop after 1 second). Students may think the ButtonState code will be running continuously, but this code runs “line by line” sequentially. So if a while loop is used, it need a condition to break it other wise it will run forever

1. How can you do the same project using analogWrite instead?